A Short History of Valentine's Day

Liquid error (sections/article-template.liquid line 99): The format option 'month_day_year' is not a supported format.

Love is in the air as the most awaited day for lovers quickly approaches. Every 14th of February, lovers around the world express their affection with each other by exchanging of gifts and greetings.

Every wondered how this romantic tradition started? Read on....

The Legend of St. Valentine

There are debates about the true history of Valentine's day, but most sources believe it was strongly influenced from religious faith and devotion.

The Catholic Church recognises at least three different saints named Valentine or Valentinus, all of whom were martyred.

One legend contends that the name of the special day was derived from Valentine or Valentinus, a Roman priest serving during the 3rd century. At that time, the Emperor Claudius II outlawed marriage, believing that single men were better soldiers than those with wives and families.

Realising the ban was unfair, Valentine defied Claudius and continued to perform marriages for young lovers in secret. When this was discovered by Claudius, Valentine was ordered to be imprisoned and put to death.

Another story suggests that Valentine may have been killed for attempting to help Christians escape harsh Roman prisons, where they were often beaten and tortured.

According to the legend during his imprisonment, Valentine fell in love with a Prison Guard's daughter who visited him during confinement. It was alleged that he sent his first “valentine” greeting when he wrote in his letter signed “From your Valentine,” an expression that is still in use today.

The legends surrounding Valentine definitely helped - by the Middle Ages thanks to the heroic deeds and being seen as a 'romantic' Valentine had become one of the most popular saints in England and France.

Valentine's Day also has origins in the ancient Roman festival of Lupercalia.

The festival was conducted annually on February 15 under the superintendence of an order of Roman priests called Luperci. It was dedicated to Faunus, the Roman god of agriculture, as well as to the Roman founders Romulus and Remus.

The festival also included fertility rites and pairing off women with men by lottery. The priests would sacrifice a goat, for fertility, and a dog, for purification. They would cut goat’s hide into strips, dip it in sacrificial blood and take to the streets, gently slapping both women and crop fields with the goat hide. It was believed that the goat hides would make them more fertile in the coming year.

The women would also place their names in a big urn and men would randomly choose a name to be paired to them for that year. These matches often ended in marriage.

Lupercalia was celebrated as a day of romance up til the end of the 5th century when Pope Gelasius declared February 14 St. Valentine’s Day. During the rise of Christianity, the festival rites were considered as a form of paganism and this was deemed “un-Christian”.

It was not until much later however, that the day became definitely associated with love....

The rise of Valentine cards

During the Middle Ages, it started to become popular to greet each other on Valentine’s day. The oldest known valentine was written in 1415 by Charles, Duke of Orleans, to his wife while he was imprisoned in the Tower of London following his capture at the Battle of Agincourt. One of the love poems say: “I am already sick of love my very gentle Valentine…”

By the 1700s, Europeans were exchanging handwritten love notes. It was also common for friends and lovers to exchange small tokens of affection.

In the 1840s Esther Howland of Worcester, Massachusetts introduced the first mass-produced valentines card in America. Howland was known as the “Mother of the Valentine” as she created intricately designed cards with ribbons, laces and colourful cut out pictures.

During the 1850s, the Gibson brothers purchased a French lithography press to print business materials. The Gibson's became one of the largest greeting card manufacturers in the world.

How the world celebrates Valentine's Day

Not every country turns to greetings cards and heart-shaped candies to declare love. Here are some unique ways countries celebrate V-day traditions:

Valentine’s Day is popular among young couples in South Korea. In fact, variations of the holiday are celebrated monthly from February to April. The gift-giving starts on the February 14th and it’s up to the women to woo their men with gifts, flowers and chocolates. The tables turn on March 14th when men shower their lovers with gifts and sweets. April 14th, also called Black Day, is for singles. They eat black bean-paste noodles to mourn their solitary status.

The Welsh do not celebrate Saint Valentine, instead they celebrate Saint Dwynwen, their patron saint of lovers, on January 25th. Love spoon is one traditional romantic Welsh gift. A love spoon is an intricately-carved wooden spoon presented as a way of showing affection to another person. Certain symbols have specific meanings: a cross for faith, bells for marriage, hearts for love, lock for security, and a wheel for support, among others. Some love spoons have difficult carvings, such as chains, as a demonstration of the carver’s skill. Today, love spoons are also given as wedding, birthday, and anniversary gifts. It is not only famous in Wales but other parts of Eastern Europe and Scandinavia which have their own unique styles and techniques.

The Seventh Night Festival, also known as “Qixi”, is the equivalent to Valentine’s Day in China. This falls on the seventh day of the seventh lunar month each year. During this time, young women offer watermelon and other fruits to the heavenly goddess Zhinu in hopes of finding a good husband. Couples also visit the temples to pray for prosperity and happiness.

According to the Chinese folklore, the heavenly goddess Zhinu fell in love with Niulang, a poor, cowherd, whom she married and had twins. When her father learned of their marriage, he sent his queen to bring Zhinu back to the stars. The king only allowed them to meet once a year on Qixi.

Philippines has similar Valentine traditions to most western countries. What makes this country unique however, is that it considers February 14th as the perfect day to get married. Mass wedding ceremonies have gained popularity in the recent years leading to hundreds of couples gathering at public areas to get married or renew their vows en masse.

An Italian Valentine’s day tradition was for young unmarried girls to wake up before dawn. They believe that the first man a woman sees on this day was the man she would marry within a year or at least strongly resemble the man she would marry. Today, Italians celebrate it through the exchange of gifts and romantic dinners. The giving of small, chocolate-covered hazelnuts wrapped with a romantic quote called Baci Perugina is also popular.

In Japan, Valentine’s Day is celebrated in similar fashion to South Korea. It starts on  February 14 and ends on March 14. Women give chocolates to men as an expression of their feelings for them. Those with a sweet tooth would surely love celebrating the day as chocolate is the most popular gift in the country. Japanese women believe that store-bought chocolate is not a gift of true love so they tend to make it themselves. However, many gift shops all over Japan still pile their shelves with chocolate a month before the love month.

South Africans celebrate Valentine’s day nearly the same as elsewhere in the world with flowers, festivals and other tokens of love. It is however also customary for women in South Africa to pin the names of their love interest on their shirtsleeves. In some cases, this is how South African men learn of their secret admirers.

Paris is considered one of the most romantic cities in the world. Also known as “The city of love”, Paris is practically the world capital of Valentine’s Day as couples from around the globe flock there for the special day. Lovers in France exchange letters and cards.

In 2017, Beer Cartel and Edible Blooms conducted a nationwide study into the attitudes and behaviours of Australian couples towards Valentine’s Day.

Over 1,800 people that were in a relationship participated in the survey.


Here is a summary of the main survey results:

For more info about the survey, visit this blog: https://www.beercartel.com.au/blog/2017-australian-valentines-survey/

Thanks to everyone that entered our Valentine's Dozen Brews giveaway.
We've picked the lucky winner, congrats to...

Win a Dozen Brews - The Beer Equivalent of a Dozen Roses 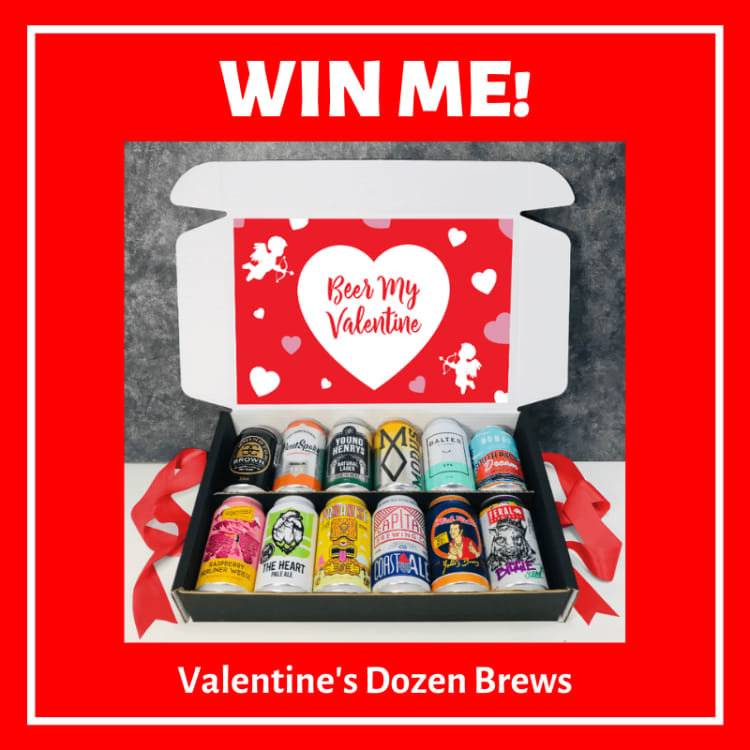 Valentine's Day is not far off (14th February) so we thought we'd give away one of our most popular gifts - our Valentine's Dozen Brews! 😊

What to send a guy at work?